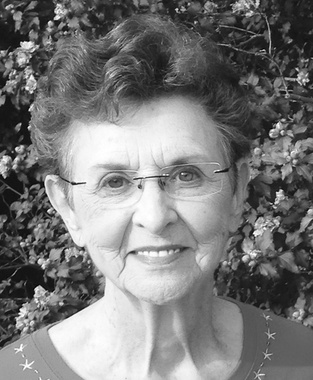 Back to Nancy's story

Nancy Anderson of Rusk, Texas, passed away Friday, December 6, 2019 in Jacksonville, Texas. She was 84 years old. A funeral service to celebrate her life will take place at 10:00 a.m., on Monday, December 9, 2019 at First Baptist Church of Rusk, under the direction of Wallace-Thompson Funeral Home with Rev. Brian Givens officiating. Burial will follow at Cedar Hill Cemetery. Visitation will be at 9:00 a.m. until service time at the church.
She was born Nancy Ann Greene in Teague, Texas on April 15, 1935. As a girl, she was a pianist and completed all levels of Girls Auxiliary in her family's church, Cloverleaf Baptist Church in Houston. She graduated from Galena Park High School in 1954. She married JoEd Anderson on June 2, 1956 and worked as an executive secretary for Prudential Life Insurance until she became a mother in 1958. She was a founding member of Second Baptist Church of Cloverleaf, where she worked part-time as the church secretary from 1956 to 1970. She also worked in the attendance office of Northshore Junior High School from 1968 to 1970. In 1970, Nancy and her husband moved to Rusk, Texas, where they established JoEd Anderson Realtors. Nancy was secretary and bookkeeper in the family business until she retired in 2005; she and JoEd were partners in all endeavors.
She was a faithful member of the First Baptist Church in Rusk, where she taught children's Sunday school for decades and in 2015 was recognized for her 45 years of singing in the church choir. She was deeply connected to her family and regularly attended annual reunions of the Curtis family. She took pride in the accomplishments of her sons, Danny Anderson, President of Trinity University in San Antonio since 2015, and Craig Anderson, Pastor of Worship for Foothills Baptist Church in Phoenix since 1997.
She carried with grace the losses caused by Alzheimer's, always maintaining her warmth and joy for being with friends and family. In 2019, she and JoEd celebrated their sixty-third wedding anniversary.
She was preceded in death by her parents, Karl Devoe Greene and Clara Lucille (Curtis) Greene of Rusk, Texas; her father-in-law and mother-in-law Edward and Wessie Anderson, of Houston, Texas; and her sister-in-
law Bobbie
Nell (Anderson) Churchwell, of Houston, Texas.
She is survived by: her husband, JoEd Anderson of Rusk; her son Danny Anderson and his wife Kimberly Anderson (and step-grandchildren Charles Guard and Julia Guard) of San Antonio, Texas; her son Craig Anderson and his wife Kim Anderson of Phoenix, Arizona, along with her granddaughter Lauren Laux (and husband Logan Laux) of Phoenix and her granddaughter Greta Anderson of Riverside, California; her brother Karl Steven (Steve) Greene and his wife Mary Greene of Rusk, Texas, with their children, her niece Karla Thrash (and her husband Bobby Thrash) and nephew Chad Greene (and his wife Tammy Greene) both of Rusk; and by her brother-in-law, Raymond Churchwell, by her niece Sandi (Churchwell) Kraemer (and her husband Trey Kraemer) and by her niece Julie (Churchwell) Rushing (and her husband Gregg Rushing), both of Houston.
In lieu of flowers, the family requests that memorial gifts be made to Rusk First Baptist Church Building Fund or Lottie Moon Christmas Offering for International Missions, P.O. Box 258, Rusk, TX 75785.
Published on December 7, 2019
To plant a tree in memory of Nancy Anderson, please visit Tribute Store.

Plant a tree in memory
of Nancy

A place to share condolences and memories.
The guestbook expires on March 05, 2020.

Be the first to share a memory or condolence.